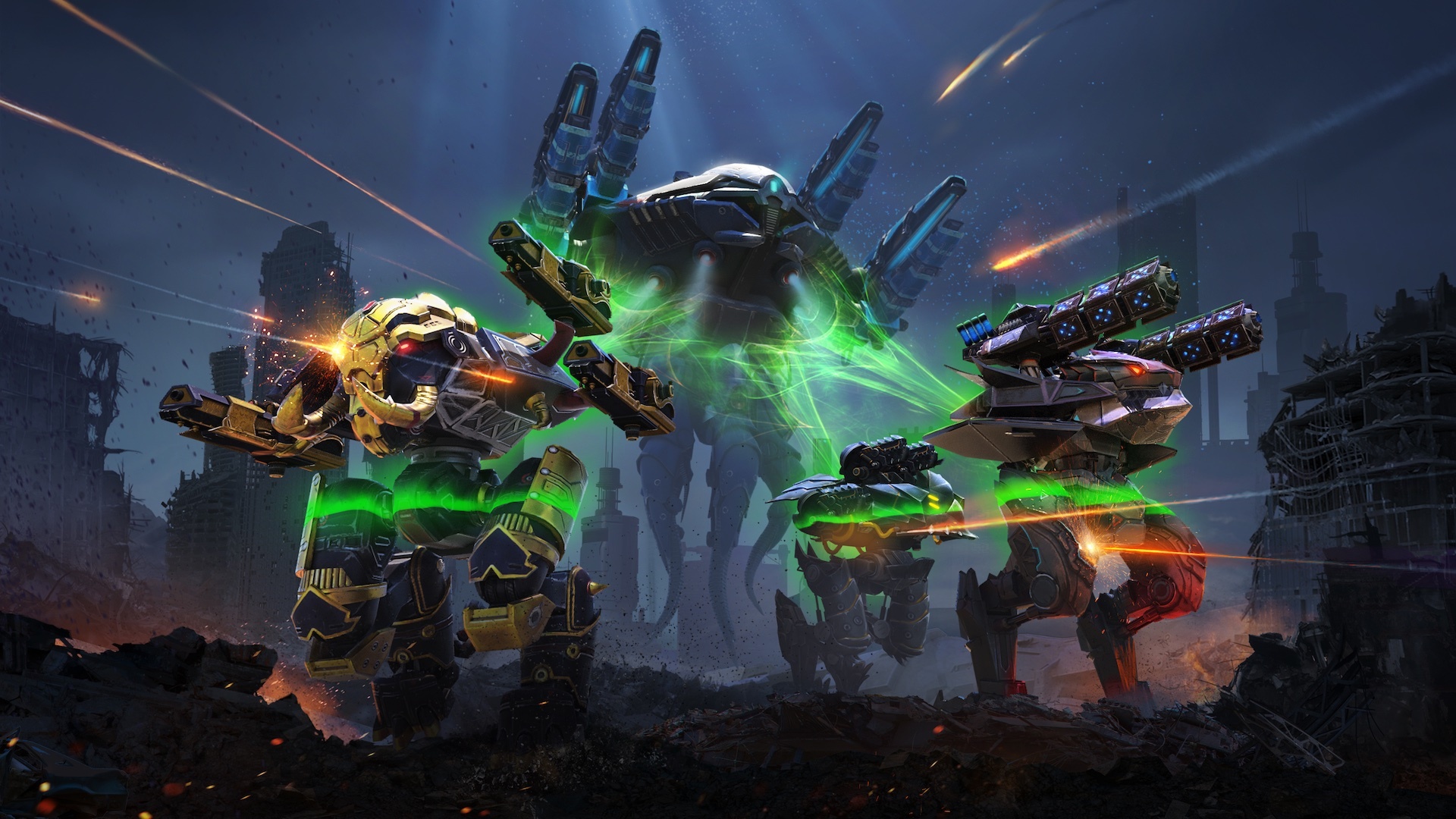 Energy machine guns with unlimited ammo – one is a light weapon and another is heavy. High accuracy makes it effective at medium range, but after long bursts the gun overheats and becomes less accurate.

While the robot's durability is at a critical level, all weapons have increased damage. If a robot has several Overdrive Units equipped, their damage bonuses addup and the activation threshold becomes higher.

Available from level 30 in special crates during the event

A hovering support fortress and a marvel of EvoLife engineering: Nodens can repair itself and its allies. It possesses the immense firepower of 4 beta-weapons and can reduce the damage dealt by multiple enemies concurrently.

Available from level 30 in special crates during the event

Alpha and Beta weapons for Titans. These energy weapons strike enemies with an arc of high-energy particles. Damage grows as the distance decreases.

All parameters are for MK1 level 12

Blitz was conceived as a dueling robot that wins battles with minimal losses through skillful ability use. However, if Blitz doesn't take cover when its ability goes on cooldown, it's usually as good as dead. We added some durability to increase its chances.

Ravana is a very weird tank. It has no shields or suppression, so to survive in the thick of a battle it needs to choose the right moment to use "astral" to survive things like Ares's ability or a volley of frost missiles.

Currently, Ravana is too unforgiving of mistakes — every move counts. We want to give it a bit more freedom with this buff.

Ao Jun is defined by its ability. It allows the white dragon to deal tremendous damage while remaining in relative safety. We don't want to take away this option, but also don't want it to be abused. It's ultimate power, and Ao Jun's pilot needs to be sure that they need that power at that exact moment before pushing the big red button.

Phantom's situation is similar to that of Ao Jun: great power, not too much responsibility. Its ability is often used only for extra resistances it provides, and the teleportation is a nice add-on that helps it hide while Phantom waits for its ability to come off cooldown. We increased ability cooldown time so it now requires a more thoughtful approach.

We primarily look at statistics from the higher leagues when rebalancing, but this time the situation is a little different. Avenger currently surpasses all options in its price category by far, and the closest alternatives, Thunder and Zeus, have no chance because it outplays them at both medium and close distances. With this change, we're shifting Avenger's focus to close combat and making room for other options in this class.

Compared to other heavy missile robots, Avalanche is best from long distances. But it is also very slow, so it just doesn't have time to get enough distance. So we're speeding it up! Both the missiles and reloading.

Thermite was intended to be a heavy version of Vortex and Aphid: a missile launcher that shoots from cover, a powerful and annoying machine that requires being able to skillfully maneuver. But other heavy slot options were leaving Thermite in the dust. (Do you like experiments? Try Thermite on Strider!)

Shooting less often but deadlier sounds great in theory, but in practice Tsar was too slow to compete with options like Gendarme, even with its AoE damage. We're giving it a boost!

These weapons will no longer immobilize randomly, but after a certain number of hits

The accumulation mechanic has worked wonderfully for shotguns and freezing guns. It's time to get rid of the last pillar of random — now you and your allies fully control the moment when Pulsar and Shredder disable the enemy's legs.