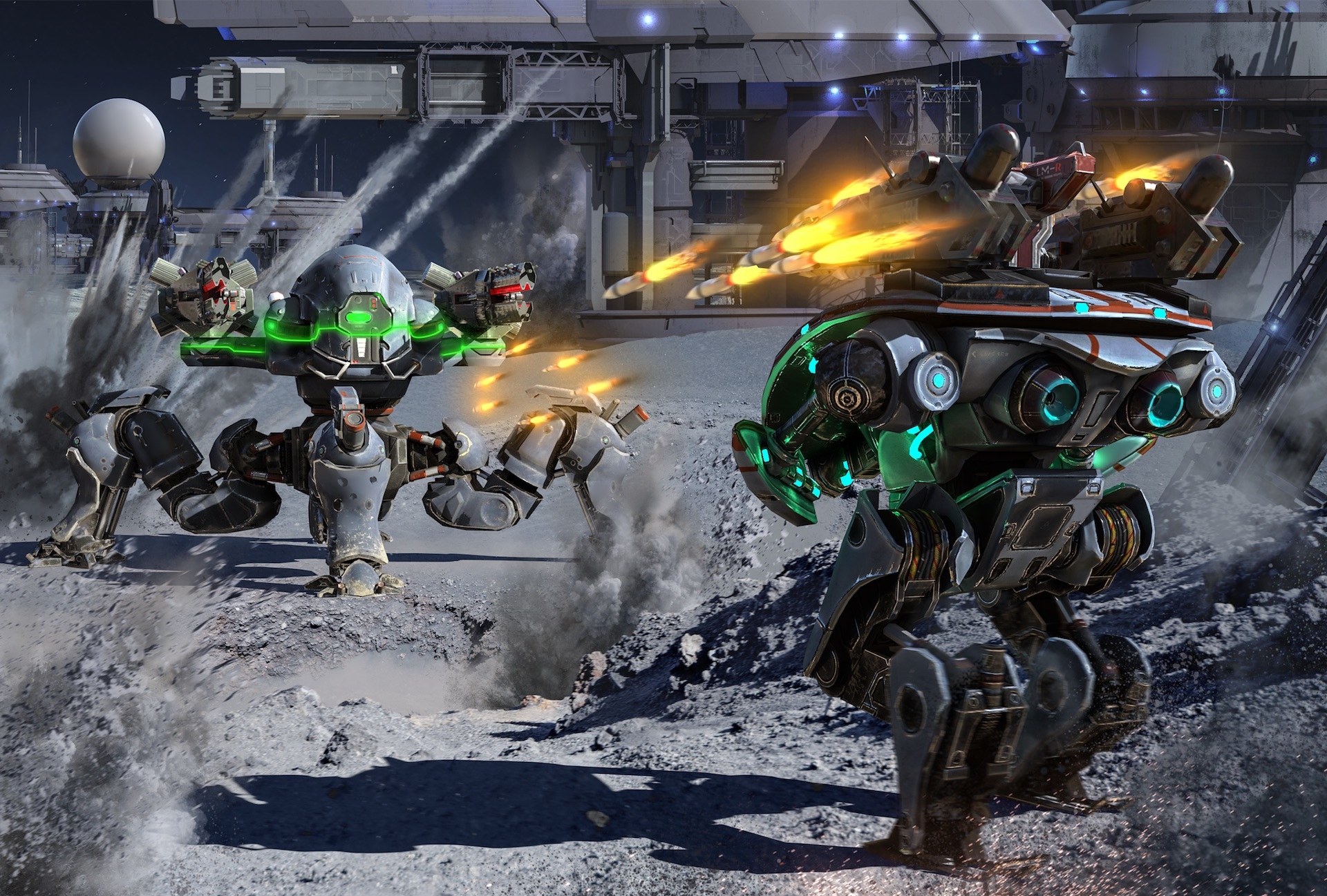 A quick quirky robot, basically a mobile ambulance. By activating the ability, Mender speeds up, gaining damage resistance. After some delay, it launches a wave that repairs a fixed amount of HP to all allied robots nearby.

Four-legged Raijin-like robot. After entering stationary mode, Weyland starts to slowly restore HP for all allies around. If Mender is good for supporting mobile storm groups, Weyland’s strength lies in securing backlines and establishing a strong defence on critical points.

Chimera is a heavy weapon that completes Spiral + Hydra line. Similarly, it is a homing missile launcher made for wearing enemies down from a safety of low cover and 600 meters range.

Avenger is the heaviest weapon in Punisher family. Enjoyed having two gatling guns in one slot? Now you can have three! 500 meters range, Shield-shattering capabilities, tons of sustain damage — with Avenger you get everything you like about chainguns turned up to 11.

Rome is a medium-sized arena map — just like Dead City, Valley or Moon.

The setting is the near future but based on a real (and very famous, evidently!) place. If you look at Google Maps, you will see the same buildings, same roads. So those of pilots who know Rome will feel at home.

Boosters are timed effects giving you buffs that can long for multiple matches.

Currently, there are two sorts of boosters: combat boosters (slight boosts of fighting power) and resource boosters(to increase your Silver, Keys and/or Honor income). You can acquire all of these using gold, but you'll be receiving whole packs of boosters for free every week after completing a small combat task.

You can activate boosters from storage whenever you need them. By activating multiple boosters of the same type you increase their duration, but not their effect.

While we're trying boosters out, we are looking to hear what you think about them. Are they too strong? Too weak? How do they help you and how do you feel about them overall? Let us know!

Clan Tasks are available for all clan players. They work similar to regular tasks: you get a new one each day, receive rewards for completion. There's one key difference: you can complete clan tasks together when playing in the same team with your clan mates (not necessarily in a squad).

Everything you do counts towards everyone's progress. Say, you have a task for beacons and your clan mate has a task for damage. In this case, both your and their beacons count toward your task completion, and all damage goes towards theirs.

What it means: Arbalest was significantly underperforming over the last couple of months, so we make it more powerful.

What it means: Gust is fun and deadly, but a bit too unreliable with its wide scatter. We reduce it to make Lil' Thunder more effective on medium distances.

What it means: even if this robot looked menacing back when it was released, people got used to keeping Hellburners at bay too well. We compensate this by giving bombermechs slightly more reach.

Update: Kang Dae changes were not included in this patch. Follow the news for further updates.