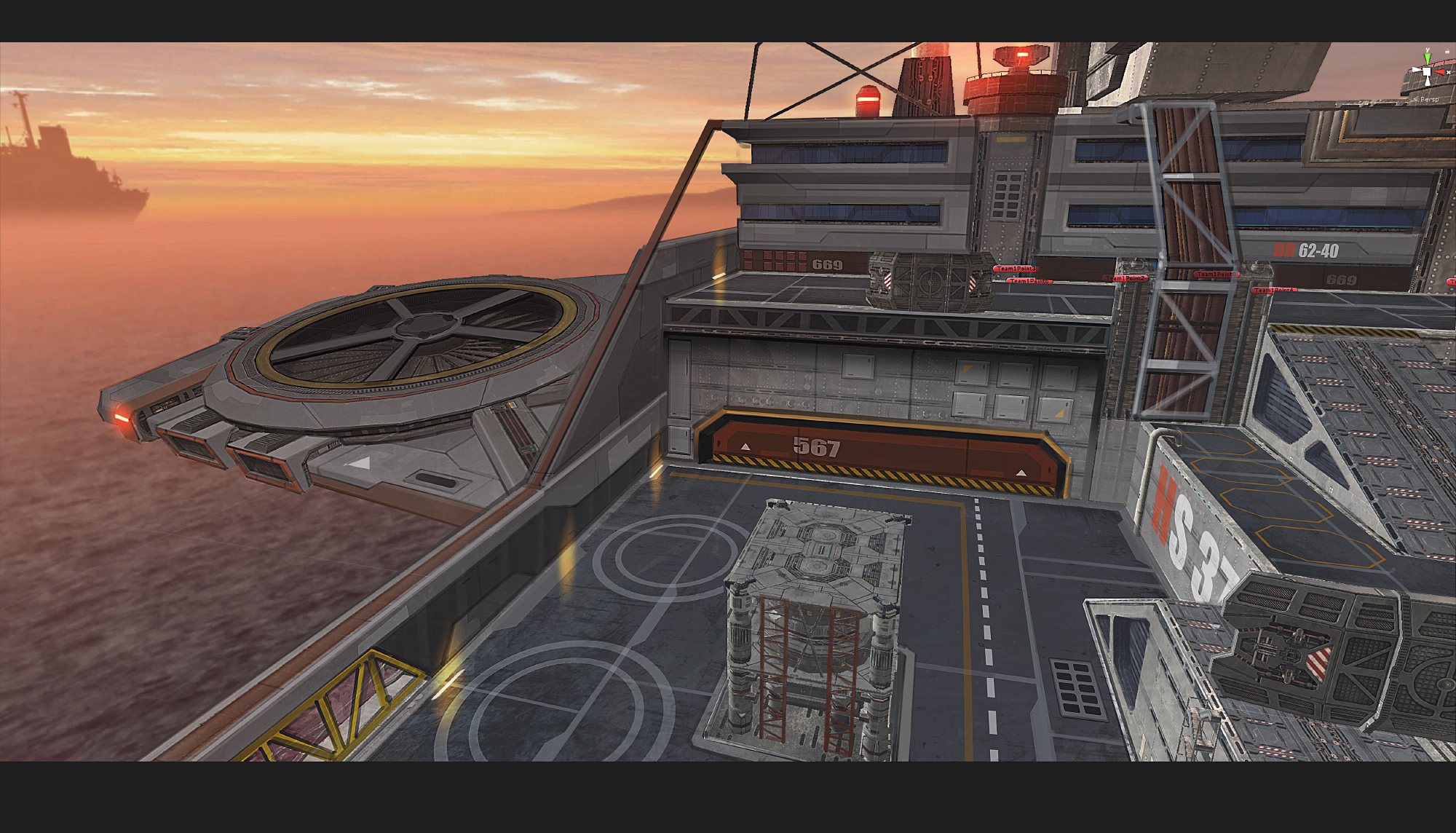 Once again we caught Mikhail Vovk, our lead level-designer, in the middle of a workday and asked him a couple of questions. Just like the last time, Mikhail told us tons of interesting things about the new map, Carrier (previously called Ship). Why is it so unique? What’s are the best tactics for this map? And how was it invented?

Note: We expect Carrier to enter the game in the 3.8 update. Stay tuned.

So what’s so special about this map?

The key difference of Carrier is in the structure of the map itself, as we call it — “tug of war” principle. Beacons are arranged in one line, coherently, one after another.

Carrier is a rather big map, its playable zone match Yamantau in size, but it doesn’t feel huge. That’s achieved mainly by the locations of covers and beacon. You always know what to do or where to go.

In contrast to Yamantau with lots of open spaces, Carrier has much more shelters and strategic places. Moreover, beacons on Yamantau congregate near the bases, with only one of them in the centre.

Speaking about that. What are the main fighting patterns on Carrier?

We wanted to pit team against each other, from the first minutes of the match. The central beacon, for example, is the place where the most intense clashes occur. It’s easy to get there, it has an excellent overview almost from everywhere (oh yeah, snipers, we can feel your vibe) and some covers, too.

There’re also ways to go around the centre, sneaking into the opposing base. Furthermore, you can capture enemy’s home beacons without being hit by the snipers — there’s a special tunnel underneath the main deck where you can hide.

In “Beacon Rush” mode you can use those beacons and tunnels to create a spawn place right behind the enemy lines. Your fellow robots appear in the tunnel, so it’s a great chance for diversions. What about the appearance? Anything catchy?

Catchy indeed. This map was new for us not only from the perspective of gameplay but also because of the visual innovations. For the first time we use water terrain and we wanted it to look good.

The ship is situated in the middle of an ocean, with a never-ending sunset in the sky. Why sunset? Because it’s one of the most beautiful views that can be and it’s perfect for the sea.

But water isn’t just a visual effect. We didn’t want to surround Carrier with invisible walls that players hit every time there’re near the edge. So we made it possible to fall from the ship. And yes, contact with the water destroys the robots instantly.

Flying or jumping bots, being incautious, can drop overboard almost everywhere, while all the others bots can be pushed from the edge in not very “crowded” areas. So only experienced pilots can use those places for their advantage. What other interesting map features can good pilots use?

The ship is not just a boat but rather a futuristic carrier with huge propellers on the side. Which are interesting tactical positions for jumping or flying robots. But at the same time they can kill bots standing on the top, so you need to be careful and check your surroundings.

Some robots can run along the edge to the enemy’s base but it can be risky.

There’re also arcs that can be used for hiding from snipers. They don’t protect 100% of the time but can be lifesaving. Snipers, by the way, can shoot even from the base but need to time their shots properly.

Were there any inspirations for the map?

Doubtless. We looked at the big shooters like Battlefield 3 or 4 and maps like “Operation Metro” or “Operation Locker”. The “tug of war” concept looked promising, we never used it before. And the water terrain was absolutely new for us, too.

So all in all this map is quite experimental and calibrated at the same time. Frankly speaking, I’ve got a good feeling about it.